Having just returned from a week in Greece, I may well have taken a few years off my life. If you have spent time on some of the Greek islands, you certainly know what I mean. And what a time to have been there, on the heels of a dramatic transition in political power (July 2019) and a resurgent economic environment, there was a sense of optimism that one would not have expected for a country emerging from a crushing economic crisis over the past dozen years.

Analysts assessed the situation in Greece a decade ago as more dire than that of the U.S. during the Great Depression of 1929. Unemployment rates spiked to over 28% from 9.7% in 2009; it now stands at 17%. Promises of meaningful structural reform by incoming Prime Minister Mitsotakis of The New Democracy party were enthusiastically received by global investors this summer, as he ushered out the far left Syriza political party and years of political turmoil. Year-to-date, the MSCI Greek ETF index far outperformed the U.S. Dow Jones index 35.5% to 15.0%, respectively.

This is likely to be the best year in the Greek equity markets in 20 years and the Greeks seem to be enjoying it given what we witnessed of the night life in Mykonos and Santorini (of course, maybe it is always like that). The Athens Index price/earnings ratio spiked from 10.4x at the end of 2018 to 14.1x now. The current European Union GDP growth forecast for Greece in 2019 is 2.9%, remarkable given that GDP collapsed by 45% from 2008 to 2016 as the country suffered through multiple austerity plans.

This was considered the greatest economic collapse for any country during peacetime. Three out of every ten companies failed this past decade according to the Greek Center of Planning and Economic Research. The level of public debt in 2018 was 183% of GDP and according to International Monetary Fund forecasts, will only be down to 135% by 2028. Currently, with $218 billion in GDP ($20.5k per capita), Greece only ranks #51 in size of economy. The ability to raise capital in the midst of the crisis became prohibitively expensive and restrictive.

In the midst of all of this economic carnage was the historic refugee crisis, with hundreds of thousands of people literally washing up on the shores of the Greek islands. According to the International Rescue Committee, Greece today hosts approximately 50k refugees, this in a country with only 11 million residents. Unfortunately, there has been a recent spike in arrivals, at rates greater than at any time over the last three years when the European Union severely restricted inflows.

The hand that PM Mitsotakis was dealt was quite problematic. Greece ranks as the second lowest in overall competitiveness in the European Union. Of the 140 countries ranked by the World Economic Forum, Greece was #44 in something called “innovation capability,” #72 in business dynamism, and #129 in access to venture capital. In fact, according to the Found.ation Accelerator in Athens, there was a mere 117 million euros in venture capital investments in 2018 with three companies accounting for nearly 70% of that.

Of particular interest, as a healthcare investor, was to better understand the impact of this period of severe economic distress on the general health of the Greek population. With an increasing understanding on the role of social determinants of health, what would be the impact when the entire system is completely overwhelmed.

The Greek National Health System, established in 1983, has been fraught with numerous inefficiencies from an overly centralized decision-making framework, to poor resource allocation models, and inadequate investments in healthcare technologies. Notwithstanding that average life expectancy now stands at 80.9 years, the current healthcare system is not considered at all patient-centric and inadequately responsive to current demands. Of note, Greece ranks #31 in life expectancy of the 228 ranked countries; as point of comparison, Monaco tops the chart at 89.3 years while Namibia ranks devastatingly last at 50.9 years. Years from now, it will be quite informative to see the impact of the economic crisis on longevity trends.

As part of the bailout terms set by European Central Bank and International Monetary Fund, Greece had to open historically protected economic sectors, implement austerity steps, address systemic corruption, and dramatically reduce public expenditures, notably those on public health services. According to the World Health Organization in 2014, public healthcare spending was 13.2% of overall government expenditures in 2006 which dropped to 11.5% in 2012, which was nowhere close to the established target of 6.0% by the terms of the bailout (equivalent to 9.0% of GDP). Just the level of pharmaceutical spend declined by more than 32% between 2006 and 2012. The chart below highlights how much of an outlier Greece was during this period for social expenditures. 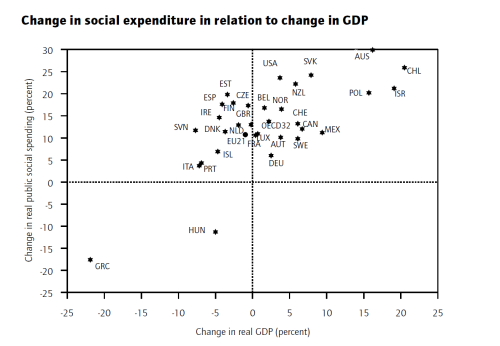 An analysis conducted by the German Institute for Economic Research, which isolated on the period of 2008 – 2015, concluded that there was a staggering 10 point decline in the Visual Analogue Scale (86.1 to 76.7) when assessing overall healthcare status of the Greek population. During that period, healthcare expenditures dropped by 41%, wages declined by 35-45%, and in 2014 alone, 36% of the population was deemed “at risk of poverty.”

While further longitudinal study is necessary, it is unambiguously clear that severe economic stress has devastating implications on population health. Greece witnessed significant rotation from the private healthcare system, which for many became immediately unaffordable, to an overwhelmed and inadequate public healthcare “safety net” system. The healthcare journal Hippokratia in 2014 highlighted the substitution of quality food for cheap energy foods which led to a spike in diabetes, obesity and hypertension (although confoundingly, Hellastat reported that pizza consumption dropped 30% that year). Three other meaningful contributors to overall decline in health conditions included a drop in medication adherence, increase in chronic stress, and decline in monitoring and follow-up.

For many populations and geographies, what was experienced by the Greeks during their devastating economic crisis, is their everyday reality. The promise of robust healthcare technology solutions may assist some of these people confronting such conditions, but when the overall healthcare system is so severely compromised, the problems become nearly intractable with far-reaching and damaging implications.