Between being stuffed at Thanksgiving and having visions of Christmas sugar plum fairies dancing in my head, thoughts of healthy eating are elusively far away. Given how pervasive sugar is in U.S. diets, it was striking to learn that the commodity price of sugar has declined so dramatically over the last two years. In fact, over this decade, save for a sugar “short squeeze” in 2016, the price has collapsed by nearly 65%.

Globally, there was a record 186 million metric tons of sugar produced last year, which was an 11% increase from the prior year. Of this amount, 178 million metric tons was for human consumption. According to the U.S. Department of Agriculture, domestic sugar consumption was 11.3 million metric tons. Nearly 80% of sugar is produced from sugar cane, which turns out to be a very important structural element of the sugar industry. Sugar cane is considered a grass and is simply cut back (versus dug up and replanted) and relatively easy to cultivate. The remaining 20% of sugar comes from beet root.

The sugar industry is incredibly complicated given all the local export subsidies and high import duties and tariffs, all of which have been further complicated by current global trade tensions. Production costs are estimated to between $0.12 – $0.14 per pound for unrefined sugar and yet, given the myriad number of structural price supports, domestic producers are receiving nearly twice that amount (and it is not uncommon that retail prices are around $0.70 per pound). Some of the largest producers include China, Brazil, Thailand and Pakistan which have entrenched and powerful sugar lobbies, further undermining the free market dynamics of the global sugar markets. The record bumper crops have created an oversupply of sugar, further depressing prices. 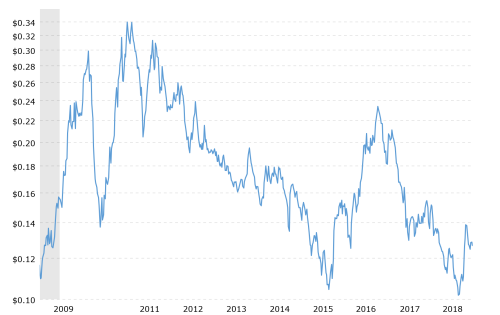 Arguably, the most problematic issue the sugar industry is confronting is that excessive use of their product is unhealthy, certainly in the amounts being consumed now. The World Health Organization estimated that per capita consumption is approximately 53 pounds annually, which spikes to 73 pounds in developed countries (ouch – a glutinous 1.5 pounds each week). The last few decades have witnessed an explosion in Type-2 diabetes, quite clearly attributed to the elevated levels of sugar consumption. Sugar producers are periodically accused of trying to influence medical research and the public health debate with substantial (and sometimes clandestine) lobbying efforts. The Sugar Association spent over $1 million lobbying Congress in 2017.

While sugar may not be the sole factor causing obesity and other metabolic syndromes, it clearly contributes to the explosion of diabetes. In 2016, 422 million people have diabetes worldwide, an increase from an estimated 382 million people in 2013 and from 108 million in 1980. The prevalence of diabetes globally is 8.5% among adults, nearly double the rate of 4.7% in 1980. Type-2 diabetes accounts for nearly 90% of the cases. In the U.S., there are over 100 million people who are diabetic or prediabetic, of whom over 30 million have diabetes (9.4% of Americans) with an annual cost of $245 billion according to the Center of Disease Control.

Considering this, there has been no shortage of announcements by food and beverage companies with initiatives to reduce sugar as a core ingredient. A few months ago, Starbucks committed to put its famous and wildly successful Frappuccino drinks on a diet, reducing the sugar content to “only” 98% of the daily value needed (down from what had been 132%). To put this in context, a Snickers bar is 54% of one’s daily need. Global soda volumes are estimated to have increased by 2% in 2018, largely from a rotation away from sugar drinks to zero-calorie drinks. Interestingly, and likely for entirely different reasons, Coke recently announced development activities to use cannabidiol ingredients for a slate of “wellness” products – another effort to diversify away from sugar-based products.

Industry is also experimenting with other alternative natural sweeteners such as stevia and something called monk fruit that do not have the negative health issues. There are also several innovative new “agtech” start-ups that have been funded to develop alternatives, such as Amai Protein, an Israeli company which is developing “designer proteins” that would serve as sugar substitutes. Alternative sweeteners often look for production approaches that will avoid supply chain issues with having to harvest crops.

The sugar industry structure makes it quite difficult to replace a relatively inexpensive commodity with relatively expensive alternatives, particularly when issues around formulation and consumer preferences are involved. Importantly, for nearly 30 years prior to 2010, the price of sugar was rarely ever above $0.10 per pound, arguably accelerating the dramatic proliferation of sugar across the U.S. culinary landscape. Akin to the energy industry, artificially low cost “dirty” fuels have curtailed the rapid  development of relatively more expensive “clean” sources of energy. Would the “unsubsidized” higher true market prices for sugar have encouraged greater innovation, sooner?

All of this complexity took me back to my final exam for Biology 101 when I labored to memorize the dozens of steps in how sugar is converted into energy in the Krebs Cycle (which fortunately I was not asked to recite). Just studying the chart below is enough to cause one to lose one’s appetite over the holidays…