For much of the past week I had the distinct honor to travel across China (Beijing, Xi’an, Suzhou, Guangzhou, and Hong Kong) as a guest of one of the leading foundations and investment firms in country as they introduced a number of their exciting portfolio companies to the local investment community. Notwithstanding significant issues facing the country – environmental concerns, restive political tensions in some of the western provinces, bad debt from the “shadow banking” system, potential real estate “bubble” – one is struck by the deliberate and coordinated efforts to solve these problems, much of it through reforms recently introduced by the third plenum of the 18th Communist Party of China Central Committee; some of the reforms are quite forward-thinking I might add.

And what an extraordinary week to be in China: Alibaba is poised to go public (rumored to be raising at least $15 billion at a $200 billion valuation), JD.com did go public (raised $1.8 billion at a $25 billion valuation), Comrade Putin was in town signing historic business deals (49 deals after 10 years of negotiations), and the US Department of Justice decided to go after five Chinese military officers for stealing trade secrets, further distancing the two countries – at the exact wrong time.

Whenever I find myself in foreign countries I make it a point to read the local papers – this past week a number of fascinating articles jumped out at me in the China Daily. First to the business section: in isolation any of these items would be of limited interest but when looked at collectively – and in light of where China has come from – an extraordinary pattern emerges.

Financial liberalization appears to be in part a response to the looming “shadow banking” crisis which analysts estimate to be as much as $2.9 trillion of local borrowings not officially recorded. To put that in proper context that would be twice the disclosed debt of the central government. Undoubtedly this has also contributed to a dangerous speculative real estate “bubble” which seems to be deflating quite rapidly now – real estate is estimated to be 15% of China’s GDP so this is a non-trivial issue. Importantly though, over time these steps should create a more robust and sophisticated capital markets ecosystem to fund future innovation which is now evident all across the country.

The other area of concern and at the top of the government’s agenda is the state of the environment. It is quite apparent that the authorities are very focused on this as poor environmental conditions, coupled with the associated impact on health, risks leading to significant social unrest. Many articles last week highlighted steps being taken to address the staggering environmental concerns.

Interestingly, and perhaps not surprisingly, according to something called the Bureau of Exit and Entry Administration of the Ministry of Public Security over 26.3 million people visited China in 2013. The vibrancy and rapid economic growth in China are attracting people from around the world, and yet even China is struggling to attract highly trained talent as its economy matures. The authors of “The Fourth Revolution: The Global Race to Reinvent the State” (John Micklethwait, Adrian Woolridge) noted that as carefully as China has reinterpreted capitalism, it is now recasting the role of central government – which is evident in everyday life in China. The authors go on to observe that Chinese leadership looks to Silicon Valley and Route 128 instead of Washington DC for inspiration and insights. Quite a troubling commentary on the US, frankly. It used to be that the US system of government was the envy of the developing world.

An interesting juxtaposition for me was seeing the Terracotta Warriors in Xi’an, which arguably is one of the greatest archaeological finds in modern times. Assembled nearly 2,500 years ago, the 8,000 terra cotta statues are arrayed to protect the tomb of Emperor Qinshihuang. What an extraordinary display of central planning. 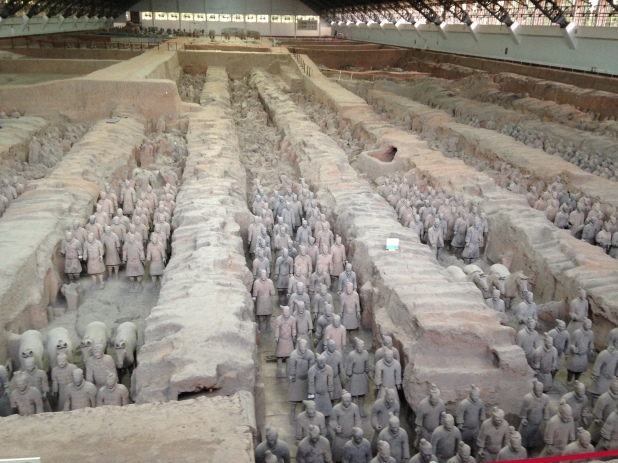 And as I listened to a number of US and Israeli entrepreneurs pitching their disruptive new technologies across China last week I was struck by the level of directed coordination focused on solving profoundly important financial and societal issues. Each of these entrepreneurs – brilliant, passionate, driven – had developed solutions to many of the problems confronting the Chinese today. And in China they found an incredibly engaged audience. The rest of the world should take note.